Is voice overrated? Whether and how people are using the assistantóin voice

Hardware supportów and voice applications is now a reality. In Poland, due to obvious language limitations, it is hardly visible, but in the West more and more people are becoming 5Gób uses voice instead of touchscreen or mouse. However, a recent study by consulting firm SUMO Heavy shows that adoption of assistantóin voice is not as fast as we suspected.

The survey was done in April this year, on pró1046 adult consumersów. What is important, the study was conducted in the States and all the results apply to the local market, which does not change the fact that we can use it as a window into the future to see what will happen in our country. The aim of the study was to find out how voice assistants are perceived by the user ofóand what is the status and potential of the so-called “voice assistants. voice commerce’u – (i.e., buying online with your voice).

Interestingly, the frequent use of voice assistantsóiPhone owners are more likely to use voiceóthan a phoneów with Android. More than half of androidów have never used this function. It is surprising looking at how much Google promotes its solution, but it may be influenced by a very wide demographic of usersóIn the U.S. market, the number of voice-assistedóin this system.

Smartphones, as the most popular device on whichówhich can be used as an assistantów voice applications are naturally the most frequently indicated by respondentsów as a place to interact with voice (49%). In second place are smart speakers (18%), whichóre are the most natural environment for a voice assistant – In addition, they are very cheap, which makes it easy to convince consumersów to buy them and put them in your home. 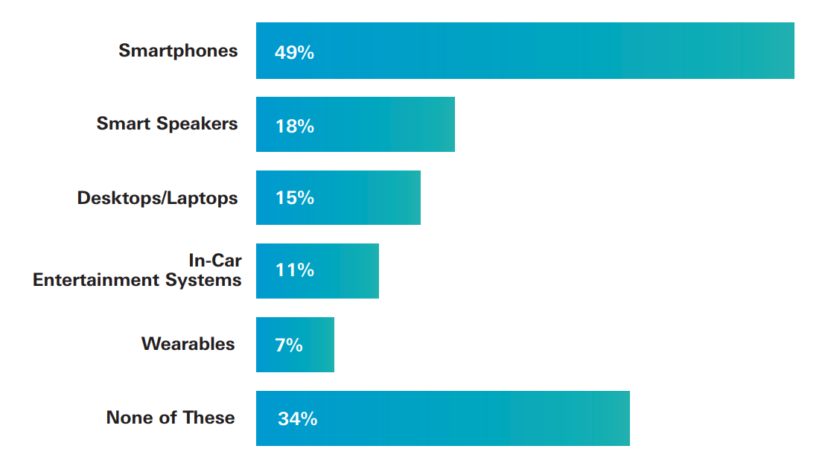 Interestingly, the third most popular place for user interactionóThe number of phones with voice assistants is desktop, with as many as 15% of respondentsóhave pointed to it. Cortana is that you?

The future of buyingóin using voice

It’s not a big surprise that buying exclusively with an assistantóvoice assistants is still a niche solution, even in the US market. Only 17% of respondents said they used a voice interface to browse or buy productsów.

Which doesn’t change the fact that voice commerce is on its way to completing „traditional” purchasingóin ecommercials, especially in theód people who value time saving or simplicityórally. Amongód categories thatóre respondents indicated as the most likely to buy them via voice are products for the home (12%), entertainment, understood as cinema tickets, flights, hotels (11%) and groceries. 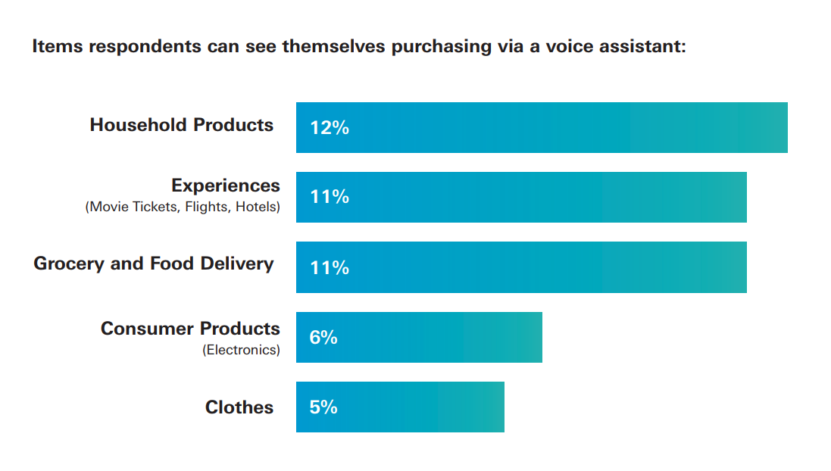 Where is Polish voice commerce in all this?

Because of the opóof the technology’s limited entry into our market – actually we are still in the process of entering – the situation is completely different with us. For now, voice is of interest to so-called “voice assistants”. early adapters, average consumers still have no idea of its potential. First voice applications are created – like eSky application for searching flightsóIs the voice service of the ING banking application. There are also digital agencies, such as Upside from Kraków, whichóThe research shows that the adoption of voice solutions has been slower than expectedóboth in B2C and B2B areas, further evangelizing the industry about the new technology.

Voice commerce itself is also starting to appear in our country. Recently, popular online grocery store Frisco.pl announced that their voice application will be launched in September. It will be able to answer 20 most frequently asked questions and give min information. about the contents of the basket or the latest promotions.

Although the research itself shows slower than expected adoption of voice solutions, they should not be underestimated. We just have a little more time for their effective implementation.

WWDC 2018 AR for multiplayer and NFC with new capabilities

WWDC 2018: AR for multiplayer and NFC with new capabilities Today, Apple will show off its new products at its annual Worldwide Developers Conference (WWDC 2018). There…